Seven years ago, Spain was on the way to becoming a world leader in renewable energy, but after the election in late 2011 of a People’s party government seen by critics as hostile to the sector, there was little or no progress.

Since June, however, the new minority government, led by Pedro Sánchez of the centre-left PSOE, has asserted its commitment to renewable energy.

One of its first acts was to go to Brussels to affirm its aim of again becoming one of Europe’s leaders in the field. The government made a commitment, confirmed last month, to remove the principal obstacle to developing solar power, the so-called sunshine tax, levied on those who generate their own electricity using photovoltaic technology. The government has also put the energy and environment ministries under one roof.

The total renewable share was the lowest since 2009 and down from 38.4 per cent in 2016 after a fall in hydroelectric production, affected by drought. The main non-renewable sources were nuclear (21.2 per cent), coal (17.2 per cent), and a total of 24.9 per cent from combined cycle and cogeneration facilities, which are largely gas powered.

The change of mood from Madrid has received a cautious welcome from the renewables sector. “There is cause for optimism, things could hardly be worse than they were,” says Fernando Ferrando, president of the Foundation for Renewable Energy in Madrid, a lobby group. “This marks a radical and substantial change in favour of renewables and against polluting fuels.”

Mr Ferrando points out that energy companies received subsidies to build wind farms in places where there was plenty of wind but not much demand. As a result, the regions with the highest renewable capacity are those with the lowest population. Although 80 per cent of the population and 75 per cent of electricity consumption is concentrated in the cities, Madrid and Barcelona have the least renewable capacity.

Galicia, with a population of 2.7m, produces 7,152MW from renewables compared with the Madrid metropolitan area (6.6m people), with 231MW.

“This marks a radical and substantial change in favour of renewables and against polluting fuels,” said Fernando Ferrando, president of the Foundation for Renewable Energy in Madrid. “Spain doesn’t have an energy policy. We’ve put too much into wind power. It’s like the joke about football: whatever happens, Germany wins. In this case it’s wind power. Generation has never been linked to consumption.”

For years energy companies have had something of a sweetheart deal with governments, while there has also been a “revolving door” with former ministers taking up senior posts in the sector and vice versa. This relationship is partly responsible for the tiny solar power generation in one of Europe’s sunniest countries, with Madrid enjoying almost twice as many hours of sun a year as Berlin. “It’s absurd that Germany produces 10 times more solar energy than Spain,” Mr Ferrando says.

Most countries allow homeowners to sell on excess power generated by their solar panels to offset the cost of installation. In Spain, the power companies persuaded the government to introduce the “sunshine tax”, by which individuals were taxed on the electricity they generated, even if it was for their own use.

As a result, solar panel installation came to a standstill, costing thousands of jobs. Solar is now to get a boost, however, says Fernando Prieto of the Sustainability Observatory, a research organisation. Besides the end of the sunshine tax, he notes, the EU is dropping tariffs on cheap, high-quality panels from China. 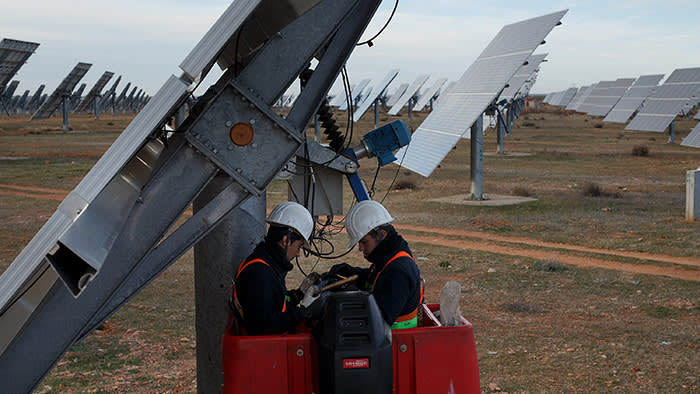 According to the International Renewable Energy Agency, the cost of solar power generation has fallen 73 per cent since 2010. Mr Prieto estimates that between them, solar, wind and biomass could create 150,000 jobs by 2025.

Hanno Schoklitsch, chief executive of Kaiserwetter, a German company that specialises in managing renewable energy assets, said soon after Mr Sánchez’s election that “Spain is now Europe’s most attractive renewable market”. He forecast there would be an investment of €80bn-€100bn in the industry between now and 2030.

The Foundation for Renewable Energy is calling on the government to make 500,000 buildings a year energy efficient, creating jobs in a country where unemployment is 15.3 per cent. It says a target of producing 80 per cent of electricity from renewables would be relatively easy to achieve, having hit a high of 62.7 per cent in March.

But Mr Prieto expects resistance from power companies. “The Sánchez government has to be firm and show courage because climate change is one of our greatest challenges. It has to do all it can to make the most of renewables.”

This was written by Stephen Burgen for Financial Times.  To see the original version of this article, please click HERE.