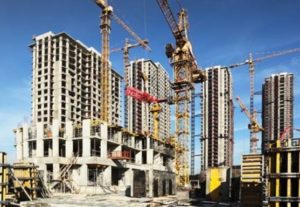 Scan the downtowns of the nation’s largest cities, and you are likely to see a staggering array of cranes. Most of them are helping to build luxury apartment buildings. In fact, multifamily construction is now at a 40-year high; the trouble is, developers are putting up the wrong kinds of buildings. The luxury market is largely overbuilt, while there is a shortage of affordable rental housing, and developers are hamstrung by the now record-high cost of construction.

Apartment completions in the 150 largest U.S. cities jumped to 395,775 units in 2017, beating 2016 production by a staggering 46 percent and more than doubling the long-term average, according to RealPage, an apartment management software and data company. Luxury, upscale buildings accounted for between 75 and 80 percent of the new supply in the current cycle.

“It’s really tough to deliver product at those lower price points. The cost of land, the cost of building materials, the cost of labor. It’s really about the same regardless of what product you’re doing and it’s just tough to make a deal work financially if you’re going toward that middle market price,” said Greg Willett, chief economist at RealPage.

Demand for luxury apartments is still strong, but that demand is by choice, not necessity. Tenants in luxury buildings are often renting a second or third home or perhaps downsizing from a larger suburban home. They are not struggling to afford the monthly payments.

“In our portfolio, which represents 70,000 units mostly in the luxury space, we’re seeing that our renters are spending a relatively low amount of their income on rent despite rents being perceptively high,” said Toby Bozzuto, president and CEO of The Bozzuto Group, a multifamily management and development company operating in the northeast and mid-Atlantic. “That being said, it is a tale of two cities. In the middle income and the lower income markets, people are spending proportionally more on their rent – so much so I believe there’s an acute crisis headed our way.”

“While the market has responded to rental housing needs for higher-income households, there are alarming trends that suggest a growing inability to supply housing that is affordable for middle- and working-class renters, let alone those with very low incomes,” said Christopher Herbert, the Joint Center’s managing director.

Rents on the high end flattened in the last year, and landlords are starting to offer concessions, like high-end amenity packages or a month’s free rent.

That is not happening outside the luxury market, where rent increases are still strong due to low supply. Developers say they simply can’t afford to add anything but luxury.

“The two-by-four doesn’t care whether it’s in a luxury building or in an affordable building. It costs the same,” said Bozzuto. “The differential of course, is the rent and there’s a huge disparity in high end rent versus low end rent. So the issue is for us to develop an economically viable, feasible project, it has to be, by its very nature, high end. The rents have to be high to support the cost.”

The cost of that two-by-four, lumber, is now at a record high. Other products like steel and concrete are more expensive, but the real cost spikes are in land and labor. Skilled construction labor is not only expensive, it is extremely difficult to find.

Investors, according to Bozzuto, are now moving away from new construction and instead rehabbing older rental stock. These so-called “value-add” projects just raise the rents on current tenants even more.

There are some government programs that offer developers financial incentives to build lower-income housing, but they don’t meet the needs.

“Those are finite and many, many of us are competing for those very finite resources,” Bozzuto said, adding that the luxury market is, “on the precipice of oversupply, but I think macroeconomic conditions are actually going to keep us this year from developing much further. Costs in particular, land costs, hard costs mostly driven by labor, will ultimately make it harder to build new buildings.”