Scientists have figured out a way to harvest water from dry desert air using only the sun’s heat. The device could be a game-changer for the approximately 2.1 billion people around the world who lack immediate access to clean drinking water.

The device is made of a porous material called a metal-organic framework (MOF) that’s housed within a clear plastic box. In simple terms, water vapor from the atmosphere condenses on the MOF material, which absorbs it like a sponge. As the water evaporates, it gets trapped and collected by the device. 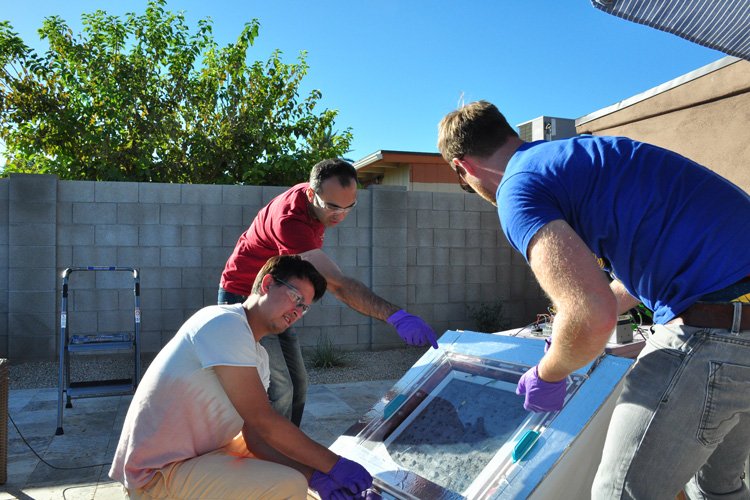 The UC Berkeley team sets up the water harvester for field tests in Arizona in October 2017. Courtesy of Farhad Fathieh/UC Berkeley

The group of scientists at the University of California, Berkeley who created the device tested a proof-of-concept last year, then recently tried a prototype out in Scottsdale, Arizona.

The device produced around 7 ounces of water after the researchers left it outside for one full day and night. While that’s not enough to hydrate you, the researchers said in a video posted by UC Berkeley that it’s relatively easy to scale up the device.

The scientists published the results of their field trial in the journal Science Advances last week.

“There is nothing like this,” Omar Yaghi, one of the authors of the report, told Phys.org. “This laboratory-to-desert journey allowed us to really turn water harvesting from an interesting phenomenon into a science.”

How the technology works

The MOF material is made up of metal- and carbon-based organic molecules, and is designed to have many tiny pockets of air between the different types of molecules.

That plethora of small cavities allows the MOF to have a relatively enormous surface area on which moisture from the air can condense. That makes the material super effective at absorbing liquids.

The MOF therefore acts like a sponge, soaking moisture from the air.

So the MOF absorbs water at night, then when the sun rises in the morning, its heat causes the water to evaporate out of the sponge-like material. But because the device is enclosed in a box, the vapor collects and becomes liquid water again, then drips down into a collection area where it can be used for drinking or any other purpose. 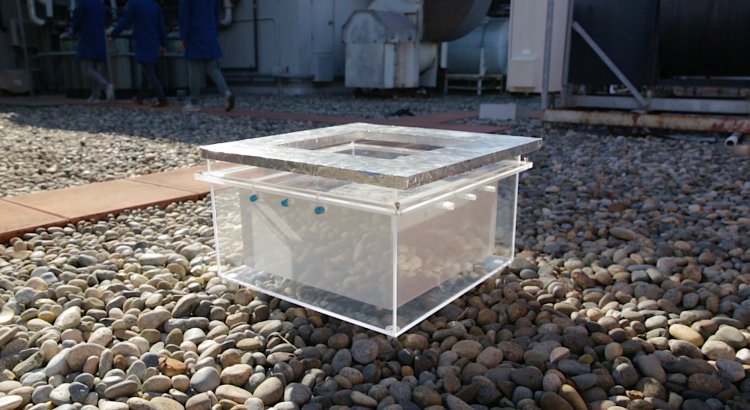 This is the water harvester, in Berkeley. Courtesy of Robert L. Sanders/UC Berkeley

The most efficient water-harvesting solution

Some similar water-harvesting devices already exist. Some that use solar panels to produce water, while others are simply plastic drums that collect rainwater.

But this one is novel in that it needs no electricity or energy inputs to produce drinkable water. And as the Scottsdale test showed, it can efficiently operate in low-humidity environments.

“There has been tremendous interest in commercializing this, and there are several startups already engaged in developing a commercial water-harvesting device,” Yaghi said.

These devices could be particularly useful in places like Cape Town, South Africa, which is running out of drinking water.

The problem with the UC Berkeley scientists’ new technology, however, is that it’s expensive to produce.

The MOF used in this test was made from zirconium, a costly metal. However, the team is working to develop MOFs out of aluminum, which is cheaper to produce and can actually absorb more water, according to their paper.

After all, there are about 13 sextillion liters of water in Earth’s atmosphere at any given time, according to the paper. Figuring out a way to harvest more of it would be a welcome solution in a warming world.

To see the water harvester in action, check out this video from the UC Berkeley:

This was written by Jeremy Berke for Business Insider.  To see the original version of this article, please click HERE.